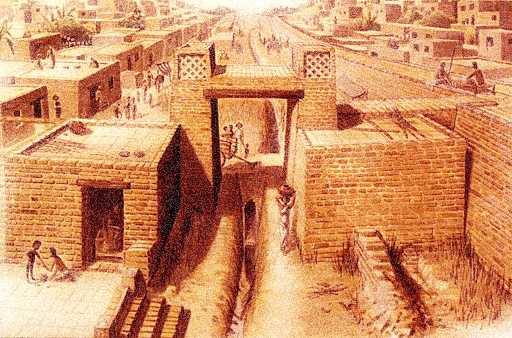 Many of these cities had covered drains.

Each drain had a gentle slope so that water could flow.

House drains passed below many lanes before finally emptying into the main drains.
Every house has its own soak pit.

The great bath was a large, rectangular tank in a courtyard.

The corridors were present on all four sides and tairs are seen on the northern and southern sides.

It was well paved with several adjacent rooms. Some structures are identified as granary.
The bricks were laid watertight with gypsum mortar.
It had drainage. It is associated with a ritual bath.
There were steps on the north and south leading into the tank.

Water was drawn from the well located in the courtyard
The used water are drained out.

The granary was a massive building with a solid brick foundation
It is 168 feet long & 135 feet wide.

Granaries were used to store food grain.
The remains of wheat, barley, millets, sesame and pulses have been found there.

The Assembly Hall was another huge public building at Mohenjo Daro.
It was a multi-pillared hall (20 pillars in 4 rows to support the roof).

Harappan civilization is said to be urban because of the following reasons.

Agriculture was an important source of subsistence for the Harappans.
The Harappans cultivated diverse crops such as wheat, barley, lentil, chickpea, sesame and various millets.
They adopted a double cropping system.
The Harappans used ploughs.
They used both canal and well irrigation.

Pastoralism was also practised by the Harappans.

They had knowledge of various other animals including buffalo, pig and elephant.

The Harappan cattle are called Zebu. It is a large breed, often represented in their seals.
They also ate fish and birds.
Evidence of boar, deer and gharial has been found at the Harappan sites.

Bead and ornament making, shell bangle making and metalworking were the major crafts.